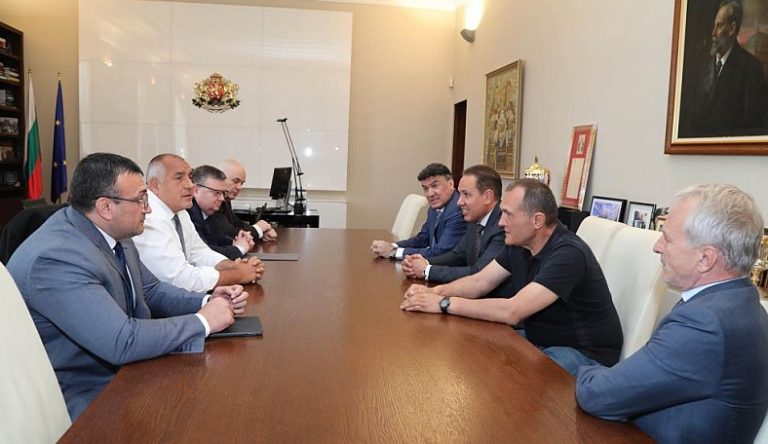 It is true that the four power aces – Boyko Borisov, Mladen Marinov, Sotir Tsatsarov and Ivan Geshev – only appear together when they can boast of having ultimately cracked down on contraband (which has happened several times already) or when there are criminal cases that are particularly critical for the government.

But on Monday their partners on the other side of the table were the president of the Bulgarian Football Union, Borislav Mihaylov, and three of the acting owners of the leading football clubs: Vasil Bozhkov for Levski, Grisha Ganchev for CSKA – Sofia and Georgi Domuschiev for Ludogorets. I say “acting”, because none of them is formally a board chairman or even an owner of his club.

The topic of the meeting remained a secret. The official version is quite comical. Of course, it was given by prime minister Borisov: “I wanted to pay attention to all clubs without much ado. I also wanted to show respect to the people who spend their money on football. We didn’t want to meddle in the Bulgarian Football Union’s affairs but we wanted to share our views on the following: firstly, it will not do developing children and youth football the way it is now, although the playing fields are now are much better than they were when the Gibon played… Children should train without paying fees, I repeat, no fees. As the finance minister said, we will do anything for children but pay for their tattoos. I mean all children. As a government we invest in education, and sports and training are an element of education. I hear that currently fees are collected, tournaments are paid… If the Bulgarian Football Union makes the calculations for first, second and third league and says how much the maintenance of the teams until 12, 16 or 18 years costs, the money will be provided. But not each separate club. Let it make the calculations and say,” he told the Darik Radio.

In his Facebook profile Borisov wrote:  “I had a meeting with the owners of the three leading football clubs: Georgi Domuschiev (Ludogorets), Vasil Bozhkov (Levski) and Grisha Ganchev (CSKA – Sofia). We discussed the beginning of the football championship with a view of its smooth running.”

After the meeting it emerged that the smooth running of the championship will be ensured by opening a telephone line where football judges can file complaints about pressure exerted on them.

Sit down and settle it

Of course, the purpose of the meeting of a prime minister, an interior minister and a prosecutor general with the football “owners” cannot be the financing of children’s football. That is only camouflage. Behind the meeting one can see Borisov’s maxim: “Let’s sit down and settle it.“ A lot of tension has accumulated in Bulgarian football in recent years, mainly along the Domuschiev – Ganchev line. Now that gambling boss Bozhkov has joined in, it is expected to escalate. That tension is not based on the football successes of one club or the failures of another. Each of the three football bosses has a core business. All of them are in critical sectors. For Ganchev, it is fuel trade, after he managed to put hand on a large part of the assets of Petrol group after KTB’s bankruptcy.

Bozhkov is well known for his interests in gambling and games of chance. While Domuschiev’s pharmaceutical business, which involves work with specific substances, makes it something that should also be of interest for the Interior Ministry.

But there is more than that. Football in Bulgaria is a loss-making business. That is, those who deal with football are aware that they will lose from it. At the same time football is a social phenomenon. The stadium is the place where fans can blow off steam.

Since his very first term in office Borisov has loved to meddle in football directly. By naming owners. And literally forcing businessmen and companies to become owners. The examples of the current deputy chairman of the National Assembly Veselin Mareshki in Lokomotiv of Plovdiv or of state-owned Maritsa Iztok thermal power plant in Beroe are some of the few publicly know ones. Another publicly known fact is Borisov’s influence on the selection of owners of Sofia’s Levski club since GERB’s leader took the helm of the state.

In order to agree to become owners, i.e. to finance the football clubs, their owners receive “subsidies” from the state. Of course, those are not official subsidies. They are concealed payments – in the form of awarded public procurement contracts or in the form of the state law-enforcement structures’ shutting their eyes to some aspects of the businesses of football owners. At least one of the football people attending Borisov’s meeting is a client of the specialized prosecution: Grisha Ganchev. Over the last year there has been official evidence from the prosecution about ongoing investigation against Georgi Domuschiev’s brother, Kiril, who is the power figure in the tandem and the face of the Ludogorets project.

The meeting with Borisov was kind of signal to the Interior Ministry and the Prosecutor’s Office to leave alone the football bosses, because the prime minister has “settled it”.

But what does Borisov have to settle with prosecuted football people? He does. That is the peace Borisov wants to get from football fans. That is clear from another post in Borisov’s Facebook profile. “They (club owners – editor’s note) said that the teams would be governed by the principles of fair play and would not allow tension on the playing field that could transfer on to the fans.”

Fans’ behavior was the explanation of minister Marinov too about his attendance of the meeting.

It is not an overstatement that fans are a shield but also a weapon. It is a public secret that they are the moving force behind protests when the aim of the protest is escalation. The last thing Borisov needs is having against himself well-organized almost paramilitary structures what some of the football fan groups actually are. To avoid problems with them, Borisov wants to settle it with the two most popular clubs, Levski and CSKA. The presence of the brother of Ludogorets’s boss’s cannot be connected with the prevention of football hooliganism.

The reason for Georgi Domuschiev’s participation in the meeting is the many scandals between Ludogorets and Grisha Ganchev’s CSKA. Scandals that have triggered public accusations of match fixing. They have also caused escalation, as was the case with the match between CSKA and Cherno More, where half of the Varna team players were removed by their own managers for failing to pass the lie detector test for a simulated match.

The war between Ganchev and Domuschiev threatens to have consequences for the entire Bulgarian football. But also for the state. Because after the Cherno More scandal no actions whatever were taken by the law-enforcement and judicial bodies.

The topic was best described by the president of the Bulgarian Football Union, Borislav Mihaylov. “We did not discuss the case with Cherno More, because nobody asked about that.” That perfectly shows the comical character of the meeting with Borisov.

Actually the result of it was summarized by Grisha Ganchev. “We agreed to not fix matches, to not buy judges, to not spoil teams etc. To ensure fair play. so may the best one win.”

In short, let bygones be bygones. No one is going to investigate it. The important thing is the have peace.