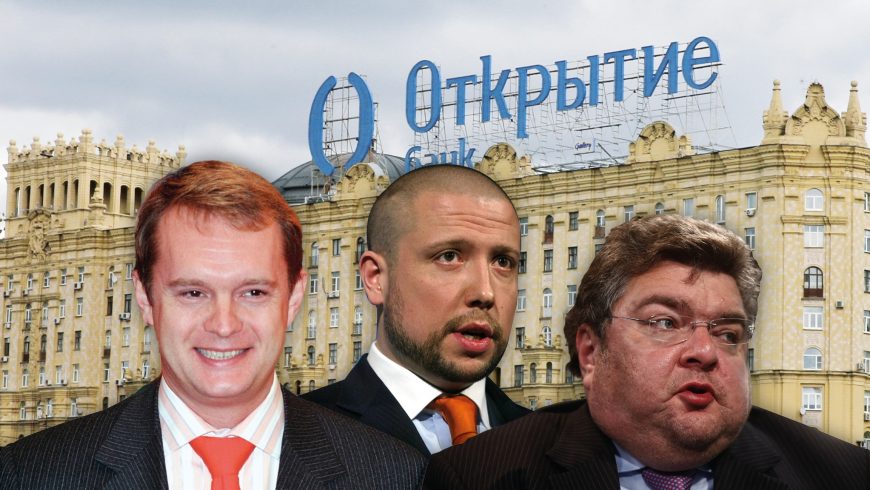 46% of the telecom has been pledged to Bank Otkritie: the Russian lender which was rescued from bankruptcy through nationalization and which is believed to be extremely close to Kremlin

A Russian bank that was recently rescued from bankruptcy with the help of the state is involved in the control over Bulgaria’s largest telecom, Bulgarian Telecommunications Company (BTC).

According to Transmedia’s information, 46% of the control over BTC has been pledged to Russia’s Bank Otkritie. This is the share formally owned by BTC supervisory board chairman Spas Rusev.

In this way BTC turns out to be under the control of two Russian banks that are directly connected with Kremlin’s official political power: VTB and Otkritie. While VTB’s role as lender and owner of BTC is well know, the emergence of Otkritie is quite a discovery.

The winner of the auction for InterV Investment’s shares was never formally named. Unofficially however it emerged that it was another Luxembourg-registered company, Viva Telecom. The Bulgarian businessman and former aide to Simeon Saxe Coburg-Gotha during his government was said to be its owner.

Viva Telecom acquired the shares of InterV Investment for a price of €330 million. The deal on the change of ownership in InterV Investment was officially closed in August 2016. In an official release then VTB confirmed it had completed the deal. The Russian bank announced it had financed Viva Telecom itself with €240 million. VTB also revealed the distribution of powers in Viva Telecom. Spas Rusev was named as the largest owner, holding 46%; VTB itself had 20% less 1 share; VTB’s Bulgarian representatives, Milen and Georgi Velchev brothers and Krasimir Kate had a total of 19%; and the remaining 15% plus 1 share was for the telecom’s former creditors.

As soon as Spas Rusev was named as leader of the consortium acquiring BTC, the main question that arose was who provided the money, i.e. who financed Spas Rusev. Rusev has never answered that question publicly. Shortly before the deal he sold the hotel operating under the Hilton brand in Sofia to Vinprom Peshtera’s owners.

BTC’s unsuccessful attempt to refinance its corporate bonds with a syndicated bank loan however shed more light on the financing for the telecom’s acquisition.

A source who took part in the talks held by Citibank to attract potential creditors revealed to Transmedia that the credit contract was closed between Luxembourg-registered Viva Edge, which is sole property of Spas Rusev and through which he participated in the distribution of ownership in Viva Telecom and Bank Otkritie. Some of the invited creditors had serious questions about the pledge of shares of BTC’s largest end owner.

A second Transmedia source confirmed that there was a financing agreement between Spas Rusev and Bank Otkritie. The contract including concrete parameters such as volume of debt and price of financing is not available to Transmedia.

According to a Transmedia source the agreement between Rusev and Otkritie was so designed as to give the Russian bank real control over the pledged shares.

Who stands behind Otkritie

Bank Otkritie is among the large Russian banks. By September 2017 it was seventh in assets with some 2.7 trillion roubles (nearly €39 billion). It is part of a financial group including Rosgosstrah Bank, insurance company Rosgosstrah, the pension funds of NPF Lukoil-Garant, NPF Elektroenergetiki etc.

In September however control over Otkritie was taken over by the Russian central bank. The first comments after the nationalization of 75% of the bank were that it was Kremlin’s big experiment. The initial forecasts show that its rescue will cost between $4.3 and 6.9 billion, which makes it the biggest ever rescue in the country so far.

The key figure among the owners is its founder, Vadim Belyaev, who indirectly controls 29% of the capital. Other owners with considerable shares are the well known Lukoil officials Vagit Alekperov and Leonid Fedun. Other shareholders include VTB Group, Alexander Mamut, Alexander Nesis and other oligarchs known to be close to Kremlin.

According to information on Bank Otkritie’s site clients of the financial institution are more than 3.6 million individuals and 276,000 companies and it has a staff of nearly 15,000 people. Otkritie is one of the large investors in government securities.

Otkritie is seen as VTB’s reserve bank or as the bank of VTB’s senior management.

Therefore it is not a surprise that Spas Rusev’s financing came from it.

The change of ownership in BTC is being challenged in several jurisdictions by Russian national Dmitriy Kosarev, who claims he acquired the 43-percent stake of Tsvetan Vasilev during the previous distribution of ownership in the telecom. In his many media appearances Kosarev has repeatedly said that BTC is being acquired by VTB’s management, while the Bulgarian participants are just dummies.

The pledge of the largest package of shares to a bank defined as one of VTB’s management gives good reason for such a theory.