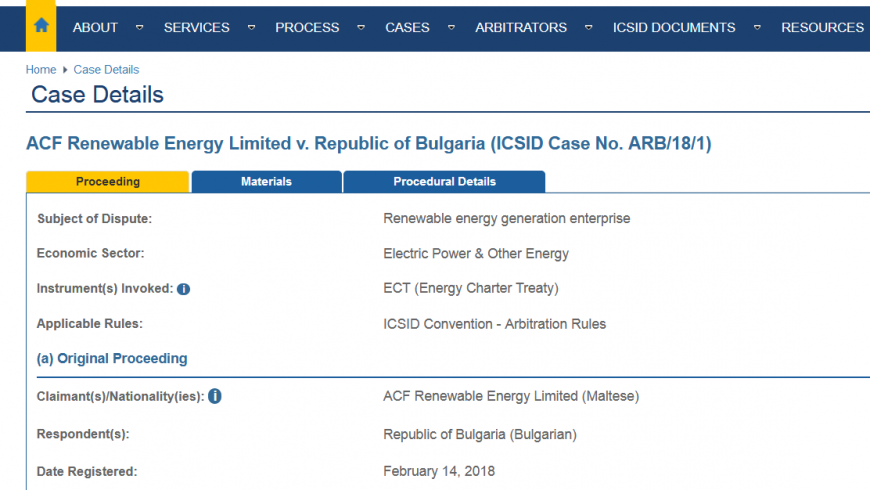 Bulgaria is again facing arbitration in Washington. Again, it is an energy case. Due to changes to the legislation regulating the buy-out of electricity from renewable sources, the owner of the largest photovoltaic park in Bulgaria, Maltese company ACF Renewable Energy Limited, has filed a claim against the state. That is seen in the system of the International Center for Settlement of Investment Disputes at the World Bank.
The case was filed in February. ACF Renewable Energy Limited’s claims remain unclear for now. Lawyers of the Maltese company are CMS Cameron McKenna, Duncan Weston and King & Spalding.
Respondent is the Council of Ministers of Bulgaria. This is the fourth energy case and the fifth one all in all pending against Bulgaria in Washington. Bulgaria is being sued by the Czech state-owned energy company CEZ, the Czech private-owned Energo-pro and the Austrian state-owned EVN. Separately, a case is under way filed by the Sultan of Oman over KTB’s bankruptcy.
Who is the claimant
ACF Renewable Energy Limited is owner of the Karadzhalovo photovoltaic park with 50-megawatt installed capacity. The solar plant in the village of Karadzhalovo, near the town of Parvomay, was built by US-based Sun Edison. In 2012 the project was transferred to a strange mix of investors from Sri Lanka, India, Pakistan and the United States. The initial idea for the project was to develop it as an industrial park. Due to poor interest it was reduced to a photovoltaic project. The investment in it is 350 million leva.
The Bulgarian company behind the project is ACWA Power CF Karad PV Park, formerly called ZBE Partners. Its owner actually is the Malta-registered ACF Renewable Energy. According to a publication of the Capital newspaper, there are three shareholder companies in it: from Dubai, the United States and Guernsey. The project in Karadzhalovo is one of the largest photovoltaic parks in the Balkans. It covers 100 ha and has more than 214,000 modules installed. The project is assessed at €181.4 million and €155 million of the total amount is a loan from the International Finance Corporation, Unicredit Group and Overseas Private Investment Corporation.