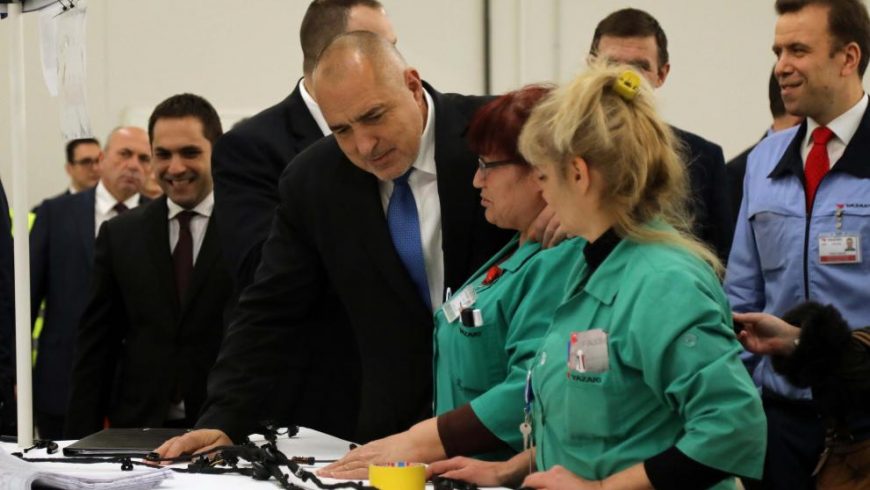 The word “post-truth”, strange as it may seem at first, was declared Word of the Year 2016 by the Oxford Dictionaries. According to the authors of the dictionary, post-truth is defined as “relating to or denoting circumstances in which objective facts are less influential in shaping public opinion than appeals to emotion and personal believe”.

Simply said, facts are reduced or taken out of context, reordered, given a different meaning and used for argumentation that is very close to “populism”. The politics of post-truth is often connected with U.S. president Donald Trump. But it has followers worldwide.

Borisov and the automotive industry

Intentionally or not, a very good representative is Bulgarian prime minister Boyko Borisov. In almost every public speech he makes Borisov talks about the excellent business environment created by his government and the constant inflow of foreign investment. There are few facts behind the premier’s words and he often manipulates and uses them in support of the truth he tries to sell his “consumers”.

Borisov’s latest show on the topic took place during the opening of a factory for automotive components in Dimitrovgrad. The production facility, which currently employs less than 150 people, was officially opened by prime minister Borisov, minister of economy Emil Karanikolov and chairman of the InestBulgaria Agency Stamen Yanev.

In their company and in front of the attending journalists the prime minister said:

“I want to congratulate the investors, because this is one of the many technological enterprises and you can see that it is fully robotized. Everything you see here is exported directly to Cologne. They are planning to hire 400 people and develop production on the adjacent plot, including state-of-the-art laser head-lights that detect obstacles on the road.”

The automotive industry is undoubtedly a very important sector for the economy of the country. According to data presented by deputy minister of economy Lachezar Borisov at the Automotive Forum Sofia 2018, the total revenue of the automotive industry in Bulgaria in 2017 was nearly €2.5 billion. That makes up 5% of the gross domestic product. The number of the employed in the sector exceeds 50,000 people and the companies operating in it are 170.

But there is one small detail. Bulgaria makes no exception from the general trend of development of the automotive industry in the region. An analysis of SeeNews from last year cited data of the International Organization of Motor Vehicle Manufacturers (OICA), which showed that a total of 629,014 motor vehicles (mainly automobiles) were produced in Southeast Europe in 2017, which was nearly 3% of the total vehicle production in Europe. Growth in the region on a yearly basis considerably exceeded the continent’s average: 9.7% compared to 3.1% in 2017.

But Bulgaria is one of the few countries in the region that cannot boast an automobile assembly plant. There are such plants in Romania, Slovenia, Serbia and Greece. A lot of other factories for components are built around them and that creates a really developed automotive industry. In Romania the sector accounts for 13% of GDP and provides more than 200,000 jobs. The automotive industry in Slovenia generates 10% to GDP and 12.5% of the country’s export. The automotive industry in Serbia provided 14% of the foreign direct investment and 10% of export in 2017. It employed more than 40,000 people in 2017, the Capital reports.

Enterprises in Bulgaria manufacture mainly automotive accessories and components. That is not necessarily bad. There is quite a lot of high technology in that type of production. As well as too little added value. That means lower incomes, lower revenues and less paid taxes. That considerably differs from Borisov’s theory for automotive production.

What is more, one of the large investors in the sector, Automotive Leather Company, has recently announced plans to terminate its operations in Bulgaria. The company had three plants for production of BMW seating covers. More than 1400 workers have been made redundant.

That only shows how dynamic the environment is when we talk about low added value production. An industry analysis of 2017, prepared by the Automotive Cluster, Colliers and PwC, names several advantages of Bulgaria as a destination. Most of them are connected with the low labor costs and the low corporate tax rates.

Thus, as in tourism, the Bulgarian automotive industry steadily promotes an image of a low-cost destination with little technology.

That again comes into collision with the premier’s views about the developments in the sector.

“Such are the plants I enjoy. Because they generate GDP. They create jobs. They pay good wages and at the same time 100% of their output is exported and the state benefits from that.”

Borisov’s frantic attempts to present Bulgaria as a place flooded by foreign investors have an easy explanation. Economic growth is one of the few facts that Borisov’s government can boast of, given widespread corruption and Bulgarian’s constant fall in the rankings on media freedom, democracy and ease of doing business.

Statistics speak for themselves: for the past 10 year foreign direct investment in Bulgaria has decreased 10 times. A lot of investors who came here before or about the time of Bulgaria’s accession into the European Union have withdrawn. Telecommunications companies, banks, insurers. The sectors are different. What is common between them is that they leave the country. And are often replaced by local actors.

Borisov has an explanation for that too:

“A real policy means a good investment climate. That is why we are kick-starting Hemus motorway. I want that we break ground on at least three lots of Hemus in March. Because you see in the south, where the motorways are, the plants mushroom. Your Council of Ministers’ meeting is over and you are in Dimitrovgrad in an hour or so. In the north there is nothing. If we leave for Targovishte or Razgrad or Varna, we will need two days. Can you see the difference?”

These again are words he spoke at the opening of the plant in Dimitrovgrad and again they differ from the truth. According to PwC’s analysis the automotive companies are located in all regions of the country. Simply their concentration is higher in South Bulgaria.