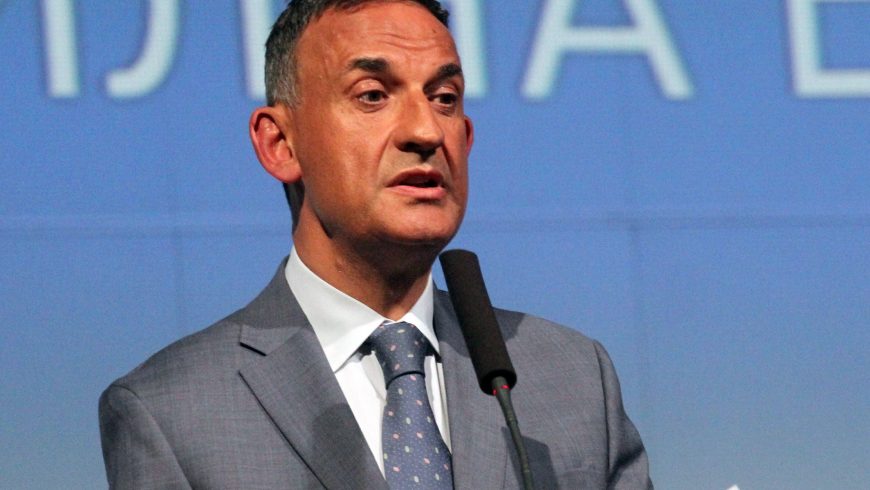 Stefan Tafrov is a person of undoubted reputation in the international circles. A diplomat with long experience, permanent representative to the United Nations, ambassador to several countries, deputy minister and presidential adviser, today he puts his expertise in the crackdown on corruption and the hard fight against the mafia in politics and the economy. Democratic Bulgaria nominated him as member of the European Parliament.

Mr Tafrov, Bulgaria has been member of the European Union for 12 years now but the people are losing trust in the institutions and insisting on change. Can we expect that the upcoming European election will be the first step to that change?

We can definitely expect that the European election will be that step, because now there is a real alternative to the parties of the status quo, i.e. the Bulgarian Socialist Party, GERB, the Movement for Rights and Freedoms, the so-called patriots. That alternative is called Democratic Bulgaria and it is the most pro-European political power in Bulgaria. The results from the election are important for the way the democratic community will be represented in the European Parliament but it will also help the democratic community be represented in the next national parliament. We believe that there will be an early election after apartment-gate and the guest-house scandal. That is why this election has double importance: both for the European election and for the parliamentary and local ones.

We are witnessing more and more examples of abuse of European financing in Bulgaria. The latest such example was the State Agriculture Fund and the way the entire program was wrongfully used. Should control on the spending of European funds be changed? Can for instance accountability and payments be managed directly in Europe?

That is one of the options considered. Given how corrupt the Bulgarian authorities are, that is probably the only possible option at present. But in the long run it is very important that the Bulgarian institutions start working properly, that the prosecution starts working properly. Meanwhile the European Union has become aware of how things happen in countries like Bulgaria and is therefore creating the European Public Prosecutor’s Office, which will be able to more efficiently collect evidence, present it to the Bulgarian court and make sure that these abuses are nipped in the bud.

So you think that is the way to crackdown on corruption about the European funds?

The judicial reform comes first. It is something Democratic Bulgaria has been fighting for since it was created. The European Public Prosecutor’s Office, unlike the Bulgarian one, initiates lawsuits against such abuses by backing them with more substantial evidence. For decades the Ministry of Agriculture and the State Agriculture Fund in Bulgaria have been controlled either directly by the Movement for Rights and Freedoms or by people somehow connected with it. That practice should change, because it is one of the main sources of corruption in relation to the European funds.

The expectations about the future EU chief prosecutor are quite big. Are they realistic?

It depends on the very person, i.e. who is going to be that chief prosecutor. That is why from the very beginning we have defended the election of Romanian Laura Kovesi. She has proven with her work in Romania that her indictments are well supported and work in the court. She has restored more than 3 billion euro to European taxpayers and has sent to jail prime ministers and politicians of all parties. That is why we from Democratic Bulgaria called on the government and on prime minister Borisov to back up Laura Kovesi, which he did not do. Bulgaria voted against Laura Kovesi in the EU Council. At the instruction of the government the members of parliament from the ruling majority who are members of the respective committees did not vote for Laura Kovesi. We constantly renew our appeals on Boyko Borisov to say what Bulgaria’s stand is in relation to her and whether Bulgaria is not trying to please the former communists in Romania, who are waging a campaign against her. Let Borisov and GERB show they are a true right-wing party, rather than support the former communists in Romania, who are extremely corrupt. That is why their power man, their chairman Liviu Dragnea, is not prime minister – because he has been convicted in at least one of the corruption cases. So let Borisov say clearly if he backs Laura Kovesi or not.

Bulgaria is trying to get rid of the monitoring mechanism in the areas of the judicial reform, corruption and organized crime. What is your position on that?

Our position is that the monitoring mechanism is becoming more and more toothless from one report to another and is serving its purpose less and less. It is now clear that despite the assertions of the government and Boyko Borisov the mechanism for Bulgaria will not be lifted so easily. European commissioner for justice Vera Jourova has said it quite clearly and directly. The question is to make it more efficient and adequate. It should include the prosecution, which is one of the main problems in our case. That is the big task. Because there are problems about the rule of law in other EU member states. For instance there are procedures against countries like Hungary and Poland and a procedure is becoming increasingly likely to be opened against Romania too. That is why the European mechanism for crackdown on corruption should be strengthened, so that instead of concealing corruption, which is actually the result, it should help Bulgaria restore its rule of law.

It seems that the only topic on which Bulgaria and a large part of the Bulgarian members of the European Parliament were really active was the so-call mobility package. What is your position on that?

Since the very beginning we have been against it, because it affects the interests of the Bulgarian transport companies. The problem is that the results so far are not good. The members of the European Parliament from countries that are against the package are a minority. So in the next European parliament a lot of work needs to be done to attract more support for our position and reach a compromise that will not affect the Bulgarian companies. The public should know that the 17 Bulgarian members of the European Parliament can hardly achieve the goals we have by themselves. Therefore they need to gain support. That requires a lot of diplomacy in the European party families and the respective committees. Therefore Bulgaria should elect the candidates of Democratic Bulgaria as members of the European Parliament, as they speak foreign languages, have expertise and know how to conduct negotiations. That is important for achieving results. People in Bulgaria want results from their European representatives, not just making a noise.