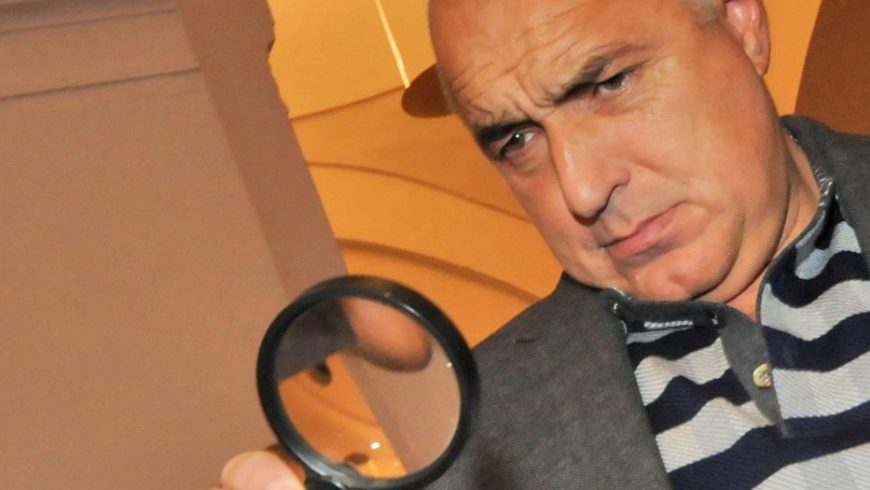 “An overarching priority of the Privatization Agency in 2010 will be completing the privatization of the state’s equity in Bulgartabac Holding.”

The year is 2009 and GERB leader Boyko Borisov has just taken power for the first time. The year will remain in history with a drop in GDP, which was not due to Borisov but to the financial and credit crisis in Western Europe and the United States. The effect for Bulgaria was withdrawal of investors and a huge deficit of nearly 2.6 billion leva. In this situation privatization was an essential source of funds. Finance minister and vice premier Simeon Dyankov had plans for at least 250 million leva revenue from privatization but they did not come to fruition.

The quote above is from the 2010 work plan of the Privatization Agency. Bulgartabac’s privatization failed to materialize. GERB’s first government will be remembered with the fact that in the first two years there were simply no privatization deals.

However, there is a good reason for that. The change of government does not automatically entail a change in the administration. It was not before 2010 that GERB managed to push through parliament a reform resulting in the merger of the Privatization Agency and the Post-Privatization Control Agency. The new combined body was headed by Emil Karanikolov – currently minister of economy – and privatization got started…

In August 2011, two years after taking office, GERB’s government finally closed its first privatization deal. Sliven-based Vodstroy 98 was selected as the buyer of state-owned Promishleno Stroitelstvo Holding. Its 12.010 million leva bid was just 10,000 leva above the minimum price asked by the Privatization and Post-Privatization Control Agency.

The price had to be paid within 30 days of the privatization decision. ‘We will use our own resources, as well as borrowed funds from investors and bank loans,’ Vodstroy 98 commented upon signing the contract. Years later, in the summer of 2014, the majority owner of the now bankrupt Corporate Commercial Bank (KTB), Tsvetan Vasilev, would say that Vodstroy’s apparent owner Ivan Mirinski was just a puppet and that the actual owner of the company was Movement for Rights and Freedoms MP Delyan Peevski.

Promishleno Stroitelstvo Holding (PSH) was the main player in the first allotment of contracts for the construction of the South Stream project. Vodstroy’s CEO and majority owner Ivan Mirinski was also representative of the whole Gazproekt Yug consortium. The consortium itself was registered at PSH’s address at 13-15 Sandor Petofi St in Sofia.

PSH had obviously defaulted on its loans from Fibank, because in March the bank sought bankruptcy for it. The proceedings have not started yet. Meanwhile PSH’s assets have been literally siphoned. As early as in 2014 the whole company was sold to a new owner, Story Invest. It was almost immediately restructured, as two new companies, PS Invest and PS Holding, were separated from it and its property started to be transferred to them.

Control over PSH’s owner Vodstroy 98 has also changed and now the company is owned by the new motorway builder of Borisov’s second government, Varna-based Hydrostroy. All that happened after in February premier Borisov ordered the suspension of several public procurement procedures for infrastructure construction that were won by Vodstroy 98. That happened after a meeting with Bulgarians in London, where he was asked if he did not see Delyan Peevski’s image when looking in the mirror.

The question caused a scandal, turned into news and – in his typical style – Borisov decided to cover it up with a few fireworks.

Similar to PSH’s is the fate of another of Borisov’s first government’s privatization gems: construction company Technoexportstroy.

Technoexportstroy was privatized in September 2012 by competitive procedure with negotiation after two unsuccessful attempts. The sales price was 51 million leva, compared with an initial assessment of 68 million leva. The buyer was AT Engineering 2000 and the money for the deal was provided by KTB. Shortly after the privatization the control over Technoexportstroy changed: the company was acquired by Cibole Services Incorporated Bulgaria, which in turn was owed by offshore-based Cibole Services Incorporated.

Facts that emerged in June and July 2014, when the Peevski-Vasilev scandal erupted, also confirm unequivocally Peevski’s control over Technoexportstroy. On the basis of claims made by Cibole Services Incorporated Bulgaria, judge Rumyana Chenalova appointed a trustee in bankruptcy and attached the bank accounts of TC IME and its main shareholder, EFV International Financial Ventures. The reason for the attachment was that Cibole claimed €14.5 million received by TC IME on June 2 under a 2012 contract that was already terminated. The period coincides with the time of Technoexportstroy’s privatization.

According to sources acquainted with the lending scheme, Technoexportstroy’s buyers received a €14.5 million loan from KTB at the time of the purchase. Later the same amount was paid to EFV by virtue of an agency contract for investment purposes against a 5-percent commission fee. In May 2014 EFV received a letter from the new owners of Technoexportstroy with a request to confirm their obligation under the agency contract. The reception of that confirmation of obligation was a sufficient reason for judge Chenalova to order attachment of the accounts of the two companies, one of which outside the national jurisdictions, and appoint a trustee in bankruptcy in TC IME.

Cibole Services Incorporated also participated in the assignment of receivables with Fibank. The bank paid 17 million leva debts of the Peevski-controlled offshore firm to KTB.

Technoexportstroy is also part of the consortium of Bulgarian companies that had to build the South Stream project.

Technoexportstroy, Cibole Services Incorporated and Promishleno Stroitelstvo Holding are three of the companies named by Tsvetan Vasilev in his latest blog post commenting on the amendments to the Bank Insolvency Act proposed by Delyan Peevski, Yordan Tsonev and Hamid Hamid. According to Vasilev, the three companies are under Peevski’s control and still owe KTB 8 million leva.

Shortly after the sale of Promishleno Stroitelstvo Holding and before the deal on Technoexportstroy Borisov’s first government made its big hit.

That undoubtedly is the privatization of Bulgartabac Holding: a procedure that leaves more questions than answers even today. One is the seemingly odd question of who, for God’s sake, bought Bulgaria’s largest cigarette company.

That the buyer is special is clear from the very structure of the deal: a quick, even express one; replaced criteria, so as to exclude strategic candidates from it and leave only portfolio ones.

Of course, a competitive procedure with only one bidder reaching the end. A portfolio minister who publicly grumbles about the chosen privatization method. A satisfied prime minister Boyko Borisov who even today praises the deal.

The contract was signed ONLY ONE DAY after the buyer was announced and approved by the Privatization Agency’s supervisory board THE FOLLOWING DAY. That is probably the fastest privatization deal in history.

Thus structured, the deal brought the state €100.1 million. That was just €100,000 above the minimum price – and equal to the price at which Bulgartabac sold it brands and distribution rights earlier this year. The buyer was BAT, which was interested in the privatization procedure but withdrew “due to strategic interests”.

And, yes, Peevski is again behind the scenes. Media publications named the MRF MP as buyer of Bulgartabac back during the privatization process. Although officially the cigarette holding was sold to Austria’s BT Invest, which was at the time owned by Russia’s VTB, it was clear to everyone that it was just a temporary event.

Who the buyer was must have been clear to the current minister of economy Emil Karanikolov, because at the time of the privatization VTB already had a put option to sell its shares in Bulgartabac to Lichtenstein-registered LIVERO ESTABLISHMENT, BELOM FOUNDATION and SEDONA FOUNDATION.

Who hides behind them is the answer to the question of who bought Bulgartabac. In several interviews after the collapse of KTB its majority owner Tsvetan Vasilev explained the financing scheme – in which he also took part, together with Vinprom Peshtera’s owners. According to Vasilev the end owner of the Panim foundation, which had to replace LIVERO ESTABLISHMENT in BT Invest’s ownership, was Delyan Peevski’s mother, Irena Krasteva. Vasilev admits that he had to be in partnership with Krasteva. All documents and registrations of the foundations were handled by Lichtenstein-based law firm Walch & Schurti.

Ahmed Dogan, Boyko Borisov and Alexander Staliyski are also said to be end owners with 8% each in Bulgartabac.

But who the real owner is remains a secret. For a short time Delyan Peevski himself appeared in Bulgartabac’s shareholder structure. Through a company of his he bought – and then sold to Dubai-based TGI Middle East – a little more than 5% of the shares in the cigarette holding.

Through the stock exchange

During Borisov’s first government the state sold its residual 33-percent stakes in electricity distribution companies E.ON Bulgaria, CEZ Bulgaria and EVN Bulgaria. The sale was carried out through the stock exchange and even managed to revive the market for a short time. The sale of EVN Bulgaria’s shares was investigated by the prosecutor’s office and resulted in the indictment of former finance minister Simeon Dyankov, former economy minister Traycho Traykov and the owner of investment intermediary Bulbrokers Ivo Prokopiev.

The three have often been the target of Delyan Peevski’s media, which gives sufficient reason to be considered people’s enemies as pointed out by MRF MP.

And some real estate

One of the landmark deals of Borisov’s first government is the sale of the unfinished building of IPK Rodina. The building with a 1.5-hectare plot on Tsarigradsko Chaussee in Sofia was sold by tender. There was only one buyer, represented by Alexander Angelov, who is known as Peevski’s lawyer. As there were no other candidates, the buyer acquired it at the minimum price of 20 million leva.

Nevertheless, while during Borisov’s first government real estate was more or less a single deal, privatization during his second government focused on real estate mainly. Guess who the buyer was.

One of the most valuable state properties in Sofia, Boyana Diplomatic Club, was sold to an unknown Stara Zagora-based firm, Exclusive Web Design, with a registered capital of 3 leva and owned by three young people.

The bidding organized by the Privatization Agency never materialized because there were no other candidates. The winning bid of Exclusive Web Design was 8.5 million leva, which was also the starting price.

Even at the time of the deal media publications connected the buyers with Delyan Peevski. That also explains the fact that there were no other candidates for the attractive property.

In February 2017 Exclusive Web Design transferred Boyana Diplomatic Club and the remaining properties acquired in the tender to Boyana Club: a company owned by Doreco Commerce, which is closely interlinked with Peevski’s business.

The list of state assets sold by Borisov’s government to Peevski will most probably be completed during GERB leader’s third government. The government says that there is nothing left to sell. And now it’s time for nationalization. That gives reasons to expect that something may be found for sale in Borisov’s fourth government.